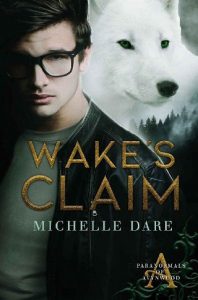 Wake had lived in fear for far too long. Life hadn’t been easy for him. Every day he resisted his natural instincts to claim the one female meant for him. An event from his past stopped him in his tracks every time his primal urges pushed him toward her.
Paige accepted the role she played in Wake’s life. She was the one he wanted but never allowed himself to have. But when someone else showed interest in her, Wake had to decide once and for all.
Putting his heart on the line left the shifter vulnerable, something he never wanted to be again. And just when he gave in to his instincts, fate dealt the pair a cruel hand.
Nightmares came true, causing Paige to flee to the only place she felt safe—in the arms of Wake.
Pack life wasn’t an easy life, but Paige wouldn’t give up the man who held her heart. Only together could the two move forward and find the happiness they both deserved.