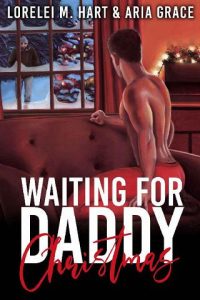 Sometimes the perfect Christmas is only a daddy away.

Omega Noah’s first Christmas since losing his husband is looming, and everyone wants to help the poor widower. His neighbors invited him over, his family invited him over, even his ex’s best friend invited him over. Being around people who all pity him is the last way he wants to spend the holidays, so he does what any omega would do. He thinks up a story and he thinks it up quick. How would they know he isn’t really spending his vacation in the mountains and hiding at home? It’s the perfect plan until his brother asks to crash at his place since he’ll be gone. Now, he has no choice but to find that mountainside getaway after all.

Alpha Cruz’s budget is busted when the family renting his cabin for the month of December backs out at the last minute. Scrambling to fill the space, he places an ad on a social media site and hopes for the best. Less than five minutes later, he has a renter, one whose profile both intrigues and saddens him. The poor omega lost his husband a year ago on Christmas in a horrible accident. When the man can’t afford the rent and thanks him anyway, he does the only thing he can do and offers a discount. There’s just something about the sorrow in the man’s eyes.

When the two of them meet, sparks fly, but Cruz knows better than to get involved with a client. He will just give the omega the best week he can. The plan is good and goes well, until mother nature comes in with a vengeance and they find themselves snowed in. More than just the fireplace heats up as the two get to know each other and feelings begin to bloom.