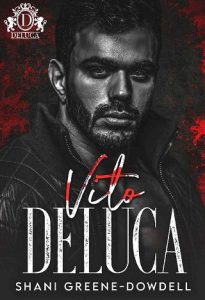 Who knew a trip to the grocery store could make two worlds collide…like literally?

Nicole Upshaw is dealing with physical and mental abuse at home. She doesn’t have time to be falling for the sexy Italian guy at the grocery store, not if the simple act of speaking to him could lead to her getting into a near-death altercation with her boyfriend. But the guy keeps meeting her at the store for her weekly shopping trips, and it’s getting harder to resist talking to him.
Vito DeLuca promised his grandfather, the DeLuca Don, that he would create a legit legacy for the DeLucas. He keeps that promise and stays above the law until he goes out of his norm to shop for a surprise party for his workers. At the store, he collides with a beautiful woman hiding something dark and dangerous. He wants to make her his, no matter what it takes to get her.
When Nicole calls him in a panic one gloomy night, Vito guarantees no one will ever bother her again. Nicole’s ex makes him break that promise, and his killer instincts come back in full force. Any man standing in his way of protecting Nicole will fall.
So, who touched what now belongs to him? Come out, come out wherever you are!