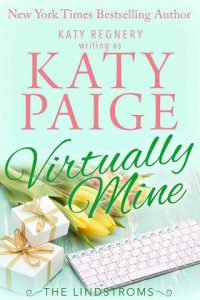 High school principal Paul Johansson has never been lucky in love, which is too bad, because he’s spent his whole life as a lonely Westley looking for his Princess Buttercup. When his friend Maggie signs him up for Internet dating, Paul is initially furious, but soon, he’s blown away by Holly Morgan, a blonde, blue-eyed art teacher from Connecticut. As they get to know one another through emails, texts and phone calls, Paul falls hard. Holly seems to be the girl of his dreams.

Zoe Flannigan—aka Holly Morgan—totally forgot about the profile she created on Meet-the-One.com two years ago. Soon after she set up her account, she was in a car accident that left her with facial scars and a limp. During the long months of recovery, she hasn’t been interested in dating at all…until Principal Paul answers her long-forgotten ad. He has a way with words, and besides: he’s crazy handsome, super kind and makes her heart flutter like mad.

But while the built-in anonymity of on-line dating allows Zoe to hide her injuries, she’ll have to meet Paul in person sooner than later. And when she does…will he still like her? Despite her broken body?