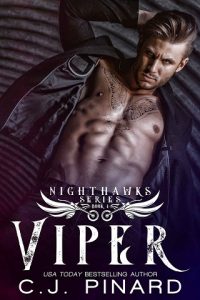 As coldblooded as a snake, but loyal to a fault.

Vampire Vane Matson formed the Nighthawks MC after having to clean up one too many messes made by his kind. Known for his ruthless tactics and eerily quiet and snakelike approach, he quickly became “Viper” and continued to build his MC with men and women just as callous and as equally trustworthy.

Viper has avoided personal relationships most of his existence, until one night, he’s called to a routine clean-up, a mess made by a pack of filthy wolves. It leaves him forced to take in a stray human named MyAnna, whose shiny black hair and big, soulful eyes are too much for him to resist. Breaking his number one rule, he tells himself it’s only temporary and then he’ll be rid of the burdensome human soon enough. Until she refuses to leave.

With his secrets threatening to be exposed, will Viper be forced to get rid of MyAnna permanently, or will she win over his cold, unbeating heart?