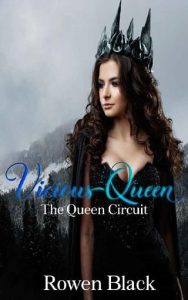 Kidnapped…
Hurt beyond anything I had ever experienced…
Lost the man I loved…
Sphotes was where I thought I flourished. I was seen as one of the smartest scientists of my time, creating advances in medicine that benefited my whole faction,the cherry on top, I was engaged to the top battle tactics male. Together we were seen as unstoppable.
Until the fire…
Until him….
I start life over in the Vriven Kingdom. A land so different from my own with traditions that I would have never known. Everything seems to go fine with the family I am with while I heal, that is until I meet this land’s Queen who forces me to be a part of what I feel is archaic. The Queens Circuit. Where women fight until death and the last one standing is the new queen. I don’t want any part of it, but she threatens to kill me where I stand.
My plan is to win and leave. Let the town pick the new ruler. That is until I fall in love with the four most amazing men I have ever met. Now my heart is on the line and to keep them I have to win. I have to kill the queen.
With dangers brewing and secrets being revealed, there is so much on the line including the four men I don’t think I could live without.