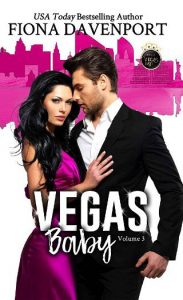 Show Me, Baby
The moment magician Julian Storm saw Anna Chapel standing at the back of the theater during one of his rehearsals, he knew she was meant to be his. After spending a long month trying to hunt her down while she ran in the opposite direction, Julian resorted to kidnapping her off his stage during a disappearing act.

Anna had zero interest in celebrities…until she met Julian. The sexy magician refused to let her ignore the chemistry between them, and he was determined to show her that fame meant nothing compared to her love.

Kiss Me, Baby
Amelia Flores was in Vegas for a bachelorette party when the bride dared her to kiss a stranger. The shy food blogger didn’t plan to follow through with her cousin’s challenge until she spotted Zack Parker. They’d never met before, but the attraction she felt toward him was explosive.

It wasn’t every day a woman strolled up and gave Zack the best kiss of his life, but life as a single dad had taught the billionaire to recognize life’s bounties. It took a single touch of her lips for him to realize the mysterious beauty was meant to be his. Now he was going to pull out all the stops to make her his wife.

Fight Me, Baby
Angelique Butler didn’t want to prance around in front of a crowd in a bikini, but the situation her brother landed her in had left her no choice. Then the decision was taken out of her hands when Michael “Saint” St. John tossed her over his shoulder and carried her away.

As a champion MMA fighter, Saint was used to taking hard hits, but nothing prepared him for his reaction to Angelique. The gorgeous blonde was meant for his eyes only, and he was more than willing to get the message across to her brother—in and out of the ring.