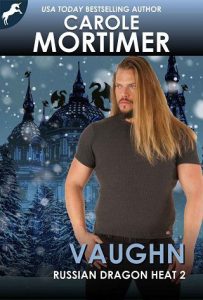 At only two hundred years old, Vaugh is the youngest of the seven Romanov dragon-shifter brothers. He almost died three months ago when he was unexpectedly attacked by a dragon hunter. Having previously been the most laid-back of the Romanov brothers the attack has changed him. He’s no longer the easy-going charmer he used to be but has become introspective and taciturn.

It’s this newfound impatience which makes Vaughn reluctant to travel to London to act as bodyguard to one of Russia’s principal ballet dancers. He’ll go, of course, because none of his brothers are available to do so, but that doesn’t mean he has to like babysitting Anastasia Chenkova.

Until he meets her and realizes she’s his fated mate.

Anastasia had never set foot outside of Russia before embarking on this world tour three months ago with The Turov Ballet Company. It isn’t anything like she’d thought it would be. Their stays in different cities around the world are brief, and with the demands of rehearsals and performances there isn’t any time for her to visit some of the wonders of those cities she had previously only seen in photographs but had long dreamed of visiting.

Worse, she has acquired a stalker, one who leaves gifts in her dressing room and hotel suite. How or when he manages to gain access, to the theatre or her hotel room, is a mystery. But the cards accompanying the flowers are becoming more and more demanding of her attention. The company director is concerned enough by them that he no longer considers their own security to be enough and has called in someone from outside.

The blond-haired Vaughn Romanov is six and a half feet tall and ruggedly handsome, and in spite of his gruff nature, Anastasia find herself attracted to his good looks and all those defined muscles. It’s an attraction Vaughn doesn’t seem to be able to resist either.

But Anastasia senses Vaughn is hiding something, she just has no idea it’s a secret that will change her previous perspective of the world and challenge every one of her dreams for the future.