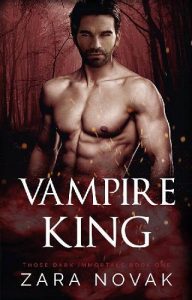 My name is Olivia, and I am an empath. Not only can I see and feel people’s emotions, I can use this information to look into their minds and find their deepest darkest secrets. Now they want me to interview someone new, a dangerous serial killer that has never broken.
Until now.
When I journey to Carcoza city I know the trip is a mistake. America’s new capital is a rough jewel in a desert of blood, a boiling pot of murder, sin, and far worse. My target is Lucas Vancino, an incredibly dangerous alpha vampire locked behind bars for the murder of thirty women.
He claims he was set up, and after seeing past that roiling wave of lust raging through his vampire mind, I see something else too, something that worries me.
I think I believe him, but it doesn’t really matter, it just so happens I picked the worst day of the year to enter this deadly prison.
As a thousand rioting prisoners battle to the death all around us the dark alpha takes me and we escape into the depraved city of Carcoza, a fugitive vampire on the run with his hostage. Before long those fierce red eyes of his turn on me, and I find myself unable to look away…
He wants me to submit. He wants me to obey. He says I’m his.
The scariest thing?
I’m starting to think he might be right.