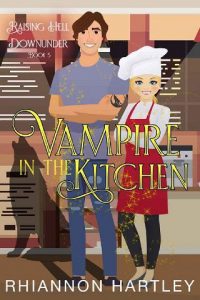 Vampire chef + corporate shifter = a recipe for bliss?
Or will this pair just cook up trouble?
Between the demands of his job, and his team-building obsessed boss, wolf shifter Eric is just trying to make it to Friday. Romance is the last thing on his mind, until a chance meeting changes everything.
His childhood friend’s little sister is all grown up and he can’t help but notice her. She’s gorgeous, gregarious, and – apparently – newly undead.
Sous Chef Sophie was blissfully unaware of Sydney Australia’s paranormal underworld…
…until she became a part of it.
It’s going to take more than black pudding to satisfy this former foodie’s newfound bloodlust. Luckily, Eric, her older brother’s best friend, has come back into her life just in time to help her deal with this unexpected turn of events.
When sparks fly between the two, Eric’s ready to forget the promise he once made his best friend to never make a move on his sister.
But happily ever after is an eternal commitment for a vampire. Can this solitary wolf shifter prove he’s worthy of Sophie’s forever?