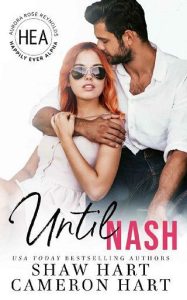 They say love is like war. Easy to begin but hard to stop.

Scarlett has been watching her father fall in love all her life. It never lasts and after a lifetime of
uprooting her life so that her father can chase after his latest love interest, she’s done.
She’s sworn off love and dating. She never wants to settle down because she knows that it’s all a lie.
Love never lasts.
Then she meets Nash.
The first time that Scarlett sees Nash, she knows that he’s dangerous. No one has ever tempted her
to break her rules of engagement, but there’s something about the charming small-town lawyer that
she can’t ignore.
When Scarlett has to face a new threat, she turns to Nash. He may be the enemy but he’s the only
one who can help her out of this fight.
Except the more that the two fight her battle, the closer they get. Will the BOOM between Nash and
Scarlett be strong enough to survive the war that’s coming?