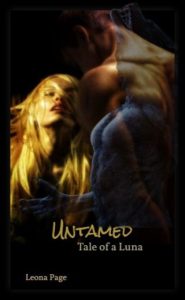 Inuit has lost nearly everything in his life. His home burned, his family slaughtered, his pack scattered or dead, he is nothing when he is found dying in the snow with a small pup in his arms.

He is rescued, given a new home, a new family, a new name.
But he is haunted by the memories of death and destruction. Proclaimed the new Alphason of the weakened RustClaw pack, he struggles with the sense that he can never fully belong to this new pack, much less lead them to a better future. Nothing feels like it is his, but duty pushes him forward.
Inuit struggles for years to accept his place, to feel anything for his adopted pack other than a cold sense of duty. Only a few wolves can penetrate the emotionless walls he’s built…
Until he sees his mate deep in the forest. A golden-eyed she-wolf, as quick and nimble as a cat and as clever as one, too.

She is a wild creature, unlike anything Inuit has ever encountered. She runs, he chases, she evades, he captures. She is the center of his world, his hope, his luna.
Willa has secrets that haunt her. Raised by her mother and father in complete isolation, all she has left in the world are the inherent skills to survive taught by her violent father and bitter warnings of the Pack told by her mother.
He is intriguing, this male with walnut eyes, but there is not a bone in Willa’s body that trusts him. He calls her ‘his’ but she cannot be owned. She is Untamed.
The bond between them is powerful. But, their seemingly separate pasts are tangled together in a way that they never dreamed possible. Family, old and new, remembered and forgotten, known and unknown, have created a web of secrets and lies that they must unravel before taking their place as the leaders of the RustClaw.

Separate, they are strong. Together they are invincible.