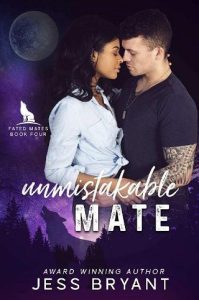 We make our own family.
Zander Leery gave up on the idea of family a long time ago. He grew up bouncing around the foster care system, never finding a home to call his own. He has no ties to anyone or anything so the last thing he expected was a phone call saying his estranged older sister made him guardian to a niece he’d never known existed.
With no idea what else to do with the child, he heads for Noir, Louisiana in search of the younger half-sister he barely remembers, but what he finds in the little bayou town will change his life forever.

We make our own fate.
Maya DeLuca gave up on the idea of fate a long time ago. She has no use for a fate that let a crazed wolf kill her parents, kidnap her sisters and torture her. She’s worked hard to overcome her traumatic past, to grow into a strong, independent woman and a fierce Alpha Wolf. She makes her own decisions, not some supernatural force.
She has her own plans and they don’t include the very human mate who just showed up on her doorstep with no idea that the supernatural world even exists.
We make our own happily ever after.
He’s human. She’s a shifter. But their connection is unmistakable. Can Zander accept this new world that he’s stumbled into? Can Maya accept the possibility that fate chose right? And if they can find common ground, will they discover that sometimes it’s our mistakes that lead us to exactly where we were always meant to be?