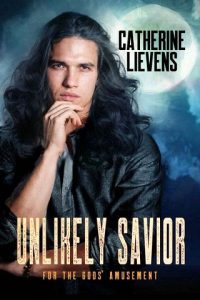 Sam doesn’t like gods. They’re arrogant and look at humans as if they’re beneath them, and maybe they are, but Sam has no problem letting them know what he thinks of them. He tries to stay away from them as much as possible, but it’s not always easy, since he works as a bartender at a trendy club.
Loki is used to people throwing themselves at him, be they humans or gods. Right now, he has too much on his mind to bother with any of them, what with his family members killing each other. Gods have always brought trouble, and his nephew Baldur’s death isn’t any different.
When Loki meets Sam, he can’t stay away, and no matter how much Sam tries to resist, he finds himself falling for the god, something he’d promised himself he’d never do. Things between them are going well, but the same can’t be said for the world around them, especially Loki’s family. Will they be enough to make Sam give up and push Loki away? Or will he be able to hold onto that love and maybe be the unlikely savior Loki needs?