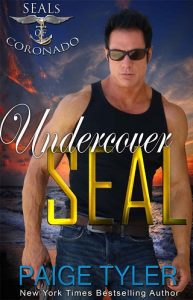 He’s everything she should fear…

Bristol Munoz’s life has never been typical. Or safe. Raised by her father, a Mexican drug lord who murdered her mother, Bristol knows she’s nothing but a bargaining chip to her father. He’ll give her to the man most able to further his cartel’s powerful holdings, and her life will go from bad to worse. Her only hope is to try another escape…Then he arrives. He’s different than the other men in her father’s compound, but no less dangerous. Maybe more so, because she’s attracted to him. But all she really wants. Working undercover for the CIA was not how Navy SEAL Nash Cantrell wants to spend his time.

But keeping missiles out of the wrong hands is something he can handle. However, he didn’t count on part of his mission involving getting close to Bristol. He can’t afford to like her, but can’t stop himself. She’s a commodity her father won’t let go easily. When his cover is blown, Nash has to stop the deal—and save Bristol. When the plan goes wrong and Bristol is kidnapped, Nash will break every rule to get her back.
Or die trying.