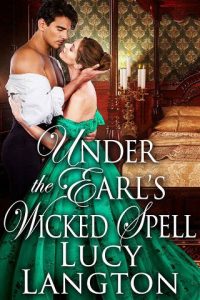 When her beloved brother was mysteriously murdered by his childhood friend, Victoria Hayward’s life sank into sorrow. His killer was sent into exile, but an unbearable rivalry has spread between the Hayward and the Mowbray family. Years after, Victoria finds herself in the most despicable position, forced to marry the man who shot her brother. As doubts start to clear the air of what happened that fateful night, Victoria’s hatred for her seductive husband will slowly turn into feelings of scandalous, guilty lust…
Will she allow herself to surrender to her untamed desire?

Rafe Mowbray is certain of his innocence, but his blurry memory leaves him helpless. His return to England was marked by the sudden death of his father and brother who was about to marry Victoria and bring peace to the families. Now, Rafe must take his brother’s place, inherit the title of the Earl of Blackmore and marry the fiery woman who deeply hates him. Yet, his flaming passion for her sparks from their very first glance, and living under the same roof starts tormenting his fervour dreams.
Will he be able to prove his innocence and win his tempting wife’s heart?

Victoria and Rafe’s conflict soon bursts into a sizzling, forbidden romance, and they find themselves trapped in a perilous game of lust and deceit. Even though they are determined to unveil the real events of that fateful night, someone will lark to make sure that truth will never shine. Will they manage to reveal the dark secrets that the past holds? After all, can these enemies ever be more than passionate lovers?

“Under the Earl’s Wicked Spell” is a historical romance novel of approximately 80,000 words. No chea