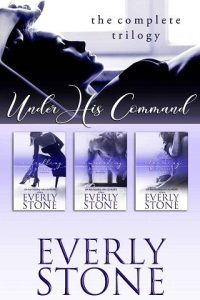 *Warning: Dominant hero Blake Roberts will own your nights and forever ruin you for lesser men*

CONTROLLING HER PLEASURE
Blake Roberts has everything he’s ever wanted—fame, money, and ownership of the hottest chain of tattoo parlors in the country. But he’s haunted by his first love, his former foster sister, Erin. The matching tattoo they share is a constant reminder of who he was before he learned how to control his emotions, his desire, and a woman’s pleasure.
He needs to purge her from his heart, and he’ll do whatever it takes to be free.
Erin Perry’s been burned by love and she’s not ready to put her body under a man’s control, let alone her heart. But then Blake shows up, the only man she ever truly loved. Blake is ruthlessly handsome, and seething commanding energy that has her aching to submit.
To be pleasured, tamed, owned, and put under His control.

COMMANDING HER TRUST
Blake Roberts is falling hard for his old flame and won’t stop until Erin is his. He doesn’t simply want her body; he wants her submission, her abandon, and the wounded heart she’s trying so hard to hide.
He wants all of her and he’s pulling out all the stops—in the bedroom and out—until she surrenders.
For Erin, what started as a charade has become all too real. She’s never experienced anything like the savage bliss she’s discovered in Blake’s arms. He tests her, dominates her, and if she doesn’t gain her freedom, soon he’ll own her—body and soul.
She has to escape even if running from Blake feels like running from the only home she’s ever known.

CLAIMING HER HEART
Blake has what he thought he wanted—Erin’s submission, her trust, and the woman he loves back in his bed. But with her submission comes protection of her secrets. Erin is in trouble and an innocent life hangs in the balance. Blake knows he can help her break free of the past, but he doesn’t know if a man like himself belongs in her future.
How can he swear to protect her from danger when he has a dark side of his own.