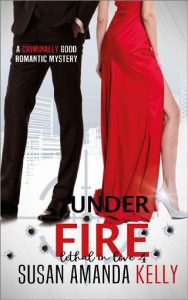 Minerva Coolidge, ex-biker-princess turned supermodel, doesn’t expect poetry from her six-foot-six, ex-Special Forces, ex-biker boyfriend. But it’s high time he declared his love for her.
She has everything else: friends, family and a meteoric rise as the face (and bottom) of Delilah’s Intrigue, a luxe lingerie line. She was even invited to walk the catwalk at a prestigious charity gala. But her man, Big Mike, won’t say those three lousy words no matter how much she hints. And putting him in a headlock would be trashy.
Minnie decides the charity gala, hosted in a sumptuous penthouse, with the city at their feet, will be the perfect place for Big Mike to finally declare his heart. But her plans are upended by one disaster after another, culminating in the murder of her catwalk rival.
Minnie’s the reason Big Mike, a global security expert, settled in the city and now guards people more at risk from cholesterol than terrorists. Then his woman narrowly escapes death on his watch. Was she the intended target? He’s determined to eliminate the threat to her. She’s equally determined to help. Even if Minnie wasn’t the intended target, Big Mike has to find the killer before Minnie’s snooping makes her a target.
And this crazy-brave, shoe-obsessed, reckless, enchantingly pretty disaster magnet of a woman wants him to tell her he loves her? He’ll show her.