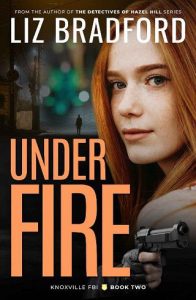 FBI Special Agent Jacq Sheppard has been fighting for trafficked women since the day her best friend disappeared at the hands of a trafficker thirteen years ago. While searching for a missing young woman, Jacq is convinced she sees her long lost friend, Morgan. Is it possible she’s part of the sex trafficking ring her team has been investigating?
But Dylan Harris, the FBI Special Agent teammate she’s been dating for the last month, doesn’t believe her. On top of his doubts, they still haven’t told his parents about their relationship. The same parents who’d disapproved of her when she’d dated his brother Chad back in college. Can Jacq’s and Dylan’s relationship survive Mrs. Harris’s criticism?
When things heat up and an assassination attempt almost kills Jacq, questions arise. Who would want her dead and why? Is it connected to the trafficking ring? More importantly, can Jacq survive being under fire?