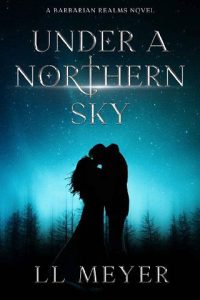 A hopeful bride . . .
Rina has suffered much in her short life. Being bartered away to a barbarian realm without her consent is just a final injustice at the hands of her cousin, the king of D’heilar. But marrying a man sight unseen – even a barbarian – may not be the end of the world, but the beginning of a new one.

A reluctant groom . . .
Luka has finally put a sword through his father’s cruel heart, and by Northern law, the mantle of leadership is now his. No matter how unwelcome, he won’t shirk his duty . . . even if the people of his realm deserve better, even if it means having a foreign bride forced upon him.

An ill-fated union.
Before they ever meet, disaster strikes. Rina is falsely accused of an unpardonable crime and meets her betrothed as a prisoner. Despite it all, they’re still expected to marry. But with neither of them willing to forgive or forget, they’re enemies, not lovers.
Caught in a political tug of war beyond their control, Luka and Rina come to realize they may have been taken for fools and that not all loves begin in beauty. Some, it seems, are born of the dark.