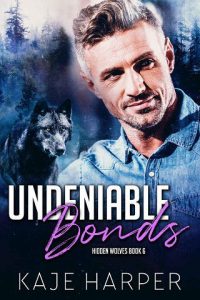 Some bonds are strong enough to last a lifetime, and change the world.

Rory O’Sullivan has spent his life alone. Once upon a time, he made one real human connection as a gay man. That moment happened in Nazi captivity, and the wolf he escaped with was a Soviet soldier. They had a taste of what love might mean, but in 1944, personal happiness had to come second to survival.

Now, seventy years later, when he feels the presence of Nikolai, somehow close and needing him after all that time, no one— not gay Alpha Aaron of the Minneapolis West pack, or rising political threats, or even top Alpha Rick Brown himself— will stop him. Rory’s going to answer the appeal he’s waited a lifetime for. Some bonds can’t be denied.

This is a new novel in the Hidden Wolves series.