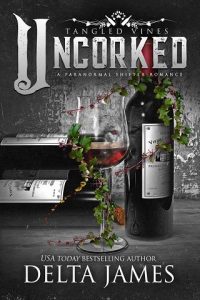 When Hunters strike at the wrong prey, Damian Steele will stop at nothing to claim the ultimate prize… his fated mate.

On the backroads of Italy, a fatal accident takes the lives of three of the four people in the car. The only survivor is an unconscious Kinzie Edwards, who is mistakenly identified as her twin sister. In a targeted act of violence, Kinzie loses her sister, Kayla and her humanity.
Damian is the brooding Alpha of the Sonoma Pack and the head of the Luna de Lobo Vineyard on the California coast. When Hunters strike at his people, Damian rushes to Italy to care for the mate to his omega. Except it isn’t Kayla he brings home.
While Kinzie hovers between life and death, a powerful change within her DNA occurs and she wakes as a wolf. Kinzie knows nothing about wolf-shifters or fated mates, unlike her sister who had been a wolf-shifter.
Thirsting for answers and revenge, Kinzie leaves the safety of Damian’s embrace to confront those who her murdered her sister. Can Damian reach her before the Hunters claim her as another trophy?