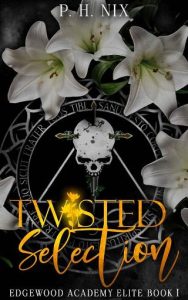 Edgewood Elite rule this town, but that doesn’t mean they can rule me.
After my dad goes missing, my family falls apart. News of an inheritance from a long-lost relative gives us the restart we need. At least, that’s what I think until we get there.
Edgewood Academy is ruled by the town’s four heirs.
Wes, broody and stuck up, wants me run out of town. He never misses an opportunity to tell me he thinks I’m trash and don’t belong.
Wyatt, the jokester who wants to possess me, doesn’t take no for an answer. From day one, he told me I would be theirs. He looks at me like he wants to fuse our souls.
Lev, silent but edgy, his calculating indifference runs hot and cold on the best of days. I don’t know if he wants to own me or destroy me.
Owen, dark and depraved, I don’t know what happened in his past, but his darkness seeks out my darkness.
Whatever the heirs have in store for me pales to the real reason I was brought here. A deal made long ago locked me into a deadly game.

Will I survive this Twisted Selection?