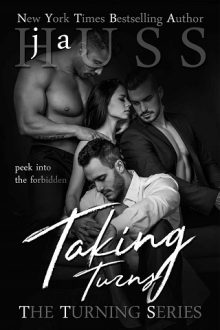 Enter a world that is real, raw, and filled with dark romance – this 2500+ page set contains the USA Today Bestselling Series and spinoffs Taking Turns, Turning Back, His Turn, Total Exposure, The Pleasure of Panic, The Boyfriend Experience, and Play Dirty.

TAKING TURNS – When her friend wants out of an arrangement she has with the owners of the exclusive invitation-only Turning Point Club, Chella is only too happy to take her place. Her time with them was supposed to be temporary. Just a little trip into the dark. A teeny-tiny peek into the forbidden. She never expected to like them. And she certainly never expected to fall in love.

TURNING BACK – Rochelle left Turning Point Club behind last year. She made a new life and moved on. But when Bric shows up asking if she’d like to play again, she can’t resist. What she had with them could’ve been so much more. It would’ve been so much better if she didn’t let it get so… personal. But now, she’s got her priorities straight. And she doesn’t need them. They need her. And this time, she’s playing for pleasure.

HIS TURN – Bric’s friends are settling down. That game is over but no one said he couldn’t play another one with new people. Jordan Wells is a lot like Bric—demanding, stubborn, and dominant. And he’s got a third player for them—but she’s just like Bric too. Three alphas vying for control of the game? It’s ridiculous. But it sure won’t be boring.

TOTAL EXPOSURE – When her therapist suggests the unconventional treatment of total exposure to cure Evangeline’s fear of being watched, she is scared to death. But the anonymous stranger on the other side of the cameras isn’t playing by the rules. He leaves her commanding notes, demanding she obey—and suddenly Evangeline finds herself craving his attention.

THE PLEASURE OF PANIC – Issy has no interest in other people’s games. She’s a player, for sure. A good one too. But she is control one-hundred percent of the time no matter what. Until her best friend, Chella, gifts her a game from Jordan Wells she never asked to play. Suddenly her whole life is turned upside down and… it’s not terrible. Because there’s a hot bodyguard playing along with her.

THE BOYFRIEND EXPERIENCE – Oaklee needs a boyfriend like… yesterday. And Jordan Wells is the game master, so she hits him up for a fake boyfriend game. Unfortunately for Oaklee, her reputation precedes her and Lawton Ayres the only guy left in town willing to put up with her over-the-top antics. He’s a billionaire, he’s well-dressed, well spoken, smart, kind… and well, he’s sorta perfect. But she’s not buying the boyfriend for herself, she needs Lawton to ruin her arch enemy. This is probably not going to turn out the way she imagined…

PLAY DIRTY – Jordan is tired of the games. He doesn’t want to do it anymore. He wants the love he lost years ago. And when she shows up looking to try again, for a moment he thinks it might work out. But it was never just the two of them. It was always three. And suddenly Jordan finds himself playing a whole new game. One he didn’t set up. One he’s not in control of. One that will change his life forever.