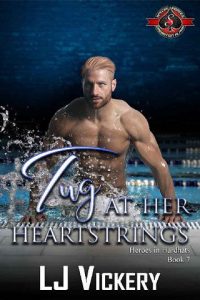 Declan “Tug” Brazos is a paraplegic, but that doesn’t define him. He’s a man who’s always operated at one-hundred-and-ten percent. He’s building a house, he’s become part of an awesome group that doesn’t judge, and he’s interested in a woman. The problem is, the female in question doesn’t know he’s confined to a wheelchair, and he’s not sure how she’ll react when she finds out…or should he say if she finds out. The pair have been phone-friends for almost a year, but does Tug dare take things to the next level by orchestrating a meeting? His heart and his friends say yes, but the big medically discharged SEAL who’s never backed down from a challenge, isn’t sure he has the courage to take this on.
Reese Leanart has a huge crush on a man she’s never seen, but every time she works up the determination for an in-person meeting, she chickens out. She was born with a condition that often attracts scorn and ridicule; no more so than from her own cousins who have made it their life’s work to grind Reese’s self-esteem into the ground. How will Tug react if she allows him to set eyes on her? Isn’t it safer to keep him as a sexy voice over the phone instead of jeopardizing their year-long friendship? The decision is a tough one, but if a possible meeting goes well, it could add a whole new dimension to her life. If it backfires, however, and screws up their increasingly intimate conversations, she’s going to end up with a boatload of regret.