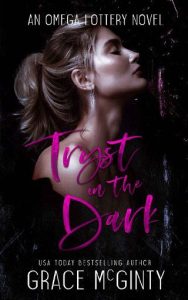 In a world where reproduction has decreased, Omegas are seen as a salvation, their ability to have children with ease envied to extremes. But Omegas were scarce, so rare that they’d become a commodity, secretively hoarded by the government, right up until their 21st birthday, where they become the grand prize in a nationwide lottery, officially known as The Allotment. Every eligible male has a chance, be they Alpha or Beta.
I hated it. I hated that when I revealed as an Omega, all my choices disappeared overnight. My future was decided the moment my parents found me sobbing and overwhelmed, hiding in my own closet, and to hell with my own hopes and dreams. I wanted to rage against my fate, but how did you say no to the very people who ruled the world?
Easy answer; you don’t. So here I am, Tryst O’Sullivan, being raffled off to random men across the country. Sure, they maintained that they were chosen at random, but what were the chances that I’d bag a honest down-to-earth mechanic one day, and then one of the richest Alphas in the country the next?
Something was rotten in the system, and I had no choice but to take it. However, if my new Pack thought they were getting a sweet, docile Omega, they were going to be surprised. I’d fight back on my own if fate decided to f*ck with me one more time.
I was used to fighting my battles alone. I was Tryst O’Sullivan, and I would be no man’s doormat.