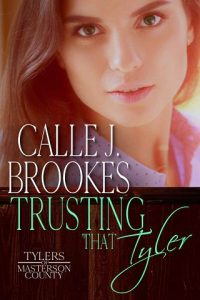 After a disastrous marriage to an abusive man, social worker Jude Hopewell wants nothing more than to build herself a new life in the little town she’s claimed as her own.
Jude feels safe in Masterson, like she never has anywhere before. Until one night when her car breaks down in the worst part of town. And one of those wild Tyler boys comes to her rescue.

Tylers have reputations as hell-raisers, troublemakers, and men who like violence just a little too much. Jude has been down that road once. She’s learned her lesson well. It’s best to just stay away.
Then Jude’s past resurfaces—and that one night with Michael is forgotten.
All she wants now is to feel safe again.

Rancher Michael Tyler had a few nasty encounters with a social worker before. A woman who made her living screwing with other people’s lives has no place in his. Except… he just can’t forget Jude. Can’t forget the way it felt right when he’d held her in his arms that one night.
Then the sheriff asks Michael and his brothers for a favor.
A favor that changes everything between them.
Now, to get to Jude, the madman will have to go through Michael—and his four brothers—first.
Michael makes her a vow. He’ll always keep her safe.
No one will ever hurt her again…