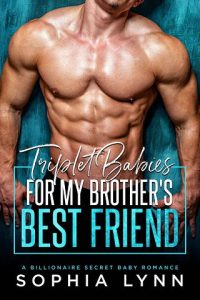 I slept with my brother’s best friend.
Then he disappeared. And I got pregnant.
Now he’s back, and he wants me to be his.
But can he handle the big secret(s) I’ve been hiding?

Nick:
Addy’s always been off limits—
My best friend’s sister and all that moral bs.
Yet, there Addy and I were,
Years later,
Pretending the past hadn’t happened.
Well, until I found out her little secret.
Hell, scratch that,
Her big secret.
Let’s just say that I gained a whole new understanding of the term
Things come in threes…

Addison:
Six years.
That was how long it’d been since I felt it.
Why did he have to look so freaking ageless?
Like some Greek God sculpted from the finest marble?
I thought I’d come to terms with how things ended,
And I thought he had too.
It was all for the best,
Especially considering what my brother would’ve done if he’d found out about us.
Yet, just being that close to Nick again,
I don’t think I can.