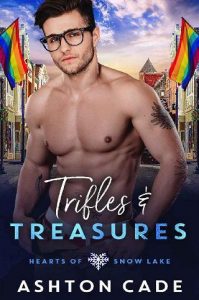 Ben:
“I keep forgetting we went to high school together.”
Damn, that hurt. I don’t know why, because I barely even talked to Adam. He was two years older than me—at that age, it might as well have been a decade—and we were in entirely different crowds. He was so much cooler than me. Probably still is from the looks of him. I couldn’t ever pull off that kind of scruffy beard or the casual, confident strut. At Adam’s core, he’s a rock star, and even if that dream never happened for him, he just exudes that “‘it”’ energy.
Despite never talking to him in high school, despite never making a move of any kind, despite my absolute certainty that I’d never talk to him ever again, I’ve never let this flame go out. And now he’s back here in Snow Lake and all those feelings are back with a vengeance.
I don’t know what it is about this guy that sparks something in me—a need, a drive to be more. Enough to make him notice me. How pathetic is that?
But now that he has noticed me, I’m shaking. I don’t know if I can face losing what I’ve always wanted.

Adam:
My mom’s really sick, and I’m back in Snow Lake to take care of her—whether she wants me to or not. It’s bringing up all kinds of memories, both good and bad—but at the same time, I can see that things have really changed.
In Des Moines, I’m a recluse who doesn’t date. Here in Snow Lake, the place I couldn’t wait to get away from as an angsty teenager, it’s like I’m a different guy. A guy that could have friends, family connections, maybe even a relationship if I could get my head out of my ass. But that’s not really me, is it? It’s just a vacation version of me. It’s not real, and when it’s time for me to leave, none of the connections “Snow Lake Adam” made here will be either, so what’s the point?
Ben thinks I’m still that punk guitar player he had a crush on so many years ago. Little does he know I turned out pretty boring. The way he looks at me with stars in his eyes makes me want to both puff up and hide at the same time, so he doesn’t find out I’m just a regular guy. Kind of a dud. But he’s so sincere and kind. And super sexy.
I wonder what would have happened if I had met him back then. Would I have still messed up my life so badly?