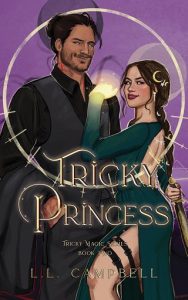 A Shadowborn Prince of Hel and a feared, all-powerful Trickster Witch will learn once again that not everything is as it seems in this second installment of the Tricky Magic series.

Travel to Hel with this steamy dark romance that has all your favorite things: Shadow play, supernaturals, loveable characters, and some tricky magic.
Rosier, crown prince and commander of Hel’s four armies, has been desperately avoiding his destiny as a ruler. When his father kidnaps Ellea, the Trickster Witch who gave him something worth living for, he has no choice but to return home. He must leave the comfort of his secluded life to journey to Hel—a path that is full of monsters, beasts, and terrible memories.
Nothing will stand in his way of saving Ellea—not his father, not Hel, and not the Gods. The funny thing is, he will be reminded once again that she never needed saving.
Ellea never saw herself stowed away in a castle, surrounded by the dead, sleeping Gods, and demons. While navigating her powers with her captor and newfound friend, she realizes that Hel itself needs work. She misses Ros every second they’re apart, but she can’t shake the feeling that she is exactly where she belongs.
A string of attacks will disrupt Ros and Ellea’s magical and steamy reunion. Only Ellea can stop her parents from ruining the balance between mortals and supernaturals, but she may have to give up a piece of her soul to do it.