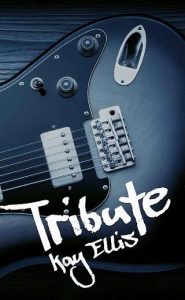 Joining a tribute band is the easy part. CJ Black looks like his famous cousin and sounds like him even more. What should be a one-way ticket to the top soon turns into a nightmare. Will is so envious of CJ it’s like he doesn’t even want him in the band. Ash doesn’t care, Henry is next to useless, and Boone is a drunk. They spend more time fighting and drinking than making the music they claim to love.

Something about Boone draws CJ to him, even when Boone turns to blackmail to get his own way. As Boone’s life spirals out of control, CJ finds himself becoming more protective. Against his better judgement, he’s falling for the troubled guitarist.
When the band is offered the gig of a lifetime and Boone’s recovery is threatened by a jealous rival, CJ must choose between the music and the man he loves.

When they’re offered a recording contract, Boone hesitates, not sure it’s the life he wants. Again, CJ has a decision to make. A music career is everything he’s ever wanted, but what is the point of finding fame and fortune if he’s alone?