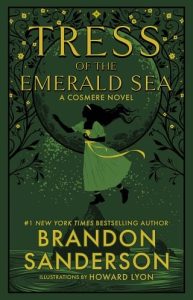 The Stormlight Archive and Mistborn with a new standalone novel for everyone who loved The Princess Bride.
The only life Tress has known on her island home in an emerald-green ocean has been a simple one, with the simple pleasures of collecting cups brought by sailors from faraway lands and listening to stories told by her friend Charlie. But when his father takes him on a voyage to find a bride and disaster strikes, Tress must stow away on a ship and seek the Sorceress of the deadly Midnight Sea. Amid the spore oceans where pirates abound, can Tress leave her simple life behind and make her own place sailing a sea where a single drop of water can mean instant death?

Note from Brandon:
I started writing this in secret, as a novel just for my wife. She urged me to share it with the world—and alongside three other secret novels, with the support of readers worldwide it grew into the biggest Kickstarter campaign of all time. I’m excited to present this first book to you at last: a different type of Brandon Sanderson story, one I wrote when there were no time constraints, no expectations, and no limits on my imagination. Come be part of the magic.