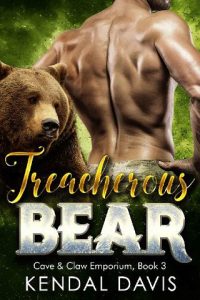 Janie ran from her hometown, certain she would never find love there…
…but when her old friend Daniel turned up in Las Vegas, he offered her a new life with him. All she had to do was to betray everyone who cared about her.
Janie Crowton was a sleek grizzly bear shifter and the devoted manager of the Cave & Claw Emporium. She’d always been close to the McCabe brothers, her friends and employers. But when they found their fated mates, a fierce jealousy replaced the goodwill she had felt for her job and her best friends. Isolated and angry, Janie found a new way of life in Las Vegas. She and her inner bear were mired in pain and dark secrets.
Daniel was the renegade McCabe who had never felt at home in South Pines. His cousins always seemed to think of him as less than them. It was common knowledge that he couldn’t feel his inner bear as a shifter should. When the city council ousted him from his position as mayor, Daniel knew he would do anything to prove himself to his hometown and his family. Burning with anger, he sought to distract himself in Vegas, only to happen upon the one person he could count on to help him exact his revenge.
When Janie and Daniel returned to South Pines, they were man and wife. If they could fool the rest of the McCabes with their charade of marriage, they had a plan to wrest everything from them. But what if they found that their top priority wasn’t revenge, but the love they had for each other?
Janie had wanted Daniel all her life. He’d just never known it.
It turned out that he hadn’t known her at all.
Deep within him, Daniel’s inner bear was awaking with a roar.
Janie was his mate.
Forever.
All that stood between them and honor was a pack of wolves and their own perfidy. If Janie could find it in her heart to accept him for who he was, then Daniel was going to find a way to be worthy of her.
No damn way was Daniel McCabe going to betray the trust of the woman he loved.