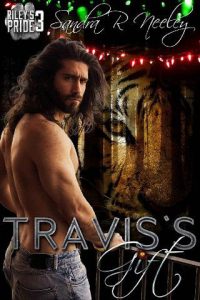 A mate, children, love. These are the things that are important to most shifters, even Tiger shifters, who are more solitary than most. They certainly once meant everything to Travis Vitrano. But service to his country changed him. It made him bitter, angry, and sullen. It also sent him back home with only one leg. Travis could barely tolerate himself, much less subject those he loved to the person he’d become — so he pushed them away. It’s best for them to not have to take care of him. They should not have to be saddled with his disability. Now, thanks to his own actions he finds himself alone, looking around at his friends finding love and starting families. He’s also watching the only woman he’s ever loved — his mate, his one — form a bond with another male. He’s reached out to her only to push her away so many times that she no longer even considers him a friend. But he’s finally healed enough to have something to offer her. Dare he try again?

Libby has been hurt by Travis’s rejections so many times she’s completely shut herself off from him. As kids, they formed a bond born of friendship, evolving into love. Once old enough, Travis recognized her as his mate. They spoke of forever and planned for their future upon his return from active duty overseas. Only, the male that returned is not the male she expected. He’s angry and resentful. He refused to allow her near him, much less speak to her in any capacity about their shattered plans. At his insistence, she stays away from him and builds another life — one that doesn’t include him. She’s joined a local Pride. She’s got new friends. A new outlook, and she’s finally finding her happy again. But now that she’s finally forged her own place in the world, Travis is suddenly in front of her, demanding that she see him — begging for another chance. The only problem is, she simply doesn’t have it in her to believe in him again. One more rejection from him just might crush what’s left of her spirit.

Travis and Libby have struggled for years to recover from his life-changing injury and the self-doubt that plagues him. He’s finally struggled through the pain enough to be able to see the world around himself and all that he’s lost. She’s finally given up the battle to make him see and remember what they once were to each other. Having your heart repeatedly torn out and trampled on by the person you trust most in the world is reason enough to give up the fight. It’s time to move on for both of them. But in which direction will that moving on take them? Surely it’s too late and they’re too far gone to even consider a reconciliation. But, it is Christmas time — miracles are known to happen at Christmas time.