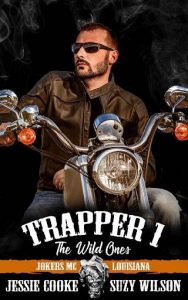 Shane “Trapper” Montgomery found his home in Tallahassee Florida as a part of the Grim Reapers MC. He was comfortable there, and just beginning to build his life when everything suddenly fell apart. A war, a murder, an explosion, a fire, and two clubs ruined forever. Suddenly dozens of men were dead and Trapper was one of the most wanted men in the state. He left everything behind and for the next year he managed to live under the radar…and then one day he walked into a bar, and there was this girl…

Kamila managed to reunite two men who even law enforcement hadn’t been able to track down. She used drugs and alcohol to reel in one, and her body the other. Kamila was used to using her body to get what she wanted. She’d learned a lot of things from the men who forced her into sex slavery. She’d learned how to live on the edge. She’d learned how to lie and manipulate, and she’d even learned how to commit murder. But what Kamila never learned was how to deal with “real” feelings. When she stopped seeing the two men as a means to an end and began to count one as her friend and the other as her lover, carefully laid plans began to quickly unravel. Now Kamila is in the crosshairs of some very dangerous, powerful men and she’s dragged Trapper, Clay, and a handful of the New Orleans Jokers into them with her.

Riding with Blackheart and the Jokers is always a wild time, but when you throw in two bikers on the run and a sexy, mysterious woman anything can happen, so hold on tightly…but don’t close your eyes because the action is a mile a minute and you won’t want to miss it!