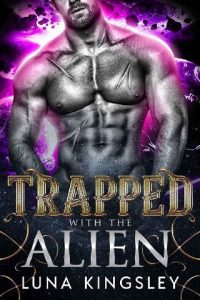 The Yinean may be gone but their human victims are left to deal with the aftermath.

Two months after the destruction of the Yinean and MIla still can’t move on. Going home isn’t an option and even if it were, she’s no longer the woman she was before she was taken. Every day she wakes from a fitful sleep and searches for something that will make everything better again. If not better, somewhat normal. No matter what she does, she can’t forget what happened to her down in the caves. She’s numb to everything now.

Ondrun is a Roh’ilian warrior but unlike his brothers, he’s gifted with understanding the latest advances in technology. He programs drones and monitors the security of the city. He also watches one of the humans who was rescued from the Yinean caves. She’s a loner but intrigues him like no other. What he wouldn’t give to understand why she tries to run away from everything. If he’s being honest, it’s more than that. He craves her like no other. He’s better with technology than trying to understand women but Mila brings out the protective alpha inside of him.

For a chance at a future together, he’ll do whatever it takes to help her deal with the trauma of her past. How far will they go to put her demons to rest? Is it too late to save her from that which haunts her?