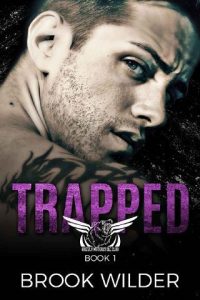 He trapped me in a living nightmare.
I was supposed to be his undoing. Instead, he became mine.
He broke my defenses, made me scream and beg.
I thought once would be enough…
But that was before I found out he left his baby inside me.
I was caught between two motorcycle clubs on the verge of war.
When one side made me an offer to keep myself safe, I took it.
If I only knew what the cost would be.
I was supposed to get close to the President of the Grizzly MC.
More than that, I was supposed to find out all of his secrets:
All the things that his enemies could use to ruin him.
I never thought he’d turn it all on me.
I never thought he’d break all my defenses.
From the moment he pinned me against his bed.
From the moment he made me beg.
From the moment he made me scream.
I thought it would be a one-time thing.
But that was before he left his baby growing inside of me.