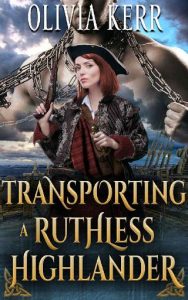 Guilty or not, his presence on her ship will not end well.

Gavina McCartney was only a child when she was called to choose between two terrible alternatives. The pirate who saved her from her horrible father would either return her to him or make her, a young lass, part of his crew! Every sailor on board objected to this horrible idea, but young Gavina decided to stay and slowly turned into a fearsome pirate herself!
The bold lass became so capable that when the old Captain retired, he handed his crew and ship over to the girl he had grown to love… Now Gavina specializes in transporting prisoners, a business that had caused no trouble until Struan Campbell was brought to her ship.
The beastly looking giant was a warrior for the Campbell clan until he cold-bloodedly murdered his own Laird! Gavina wants to see the ruthless killer with her own eyes, but, when she tries to speak to him, Struan lunges at her like a caged animal and declares that she’s making a huge mistake.
The young Captain has heard it all before and moves on, as every other prisoner claims he is wrongly convicted. But something in Struan’s eyes is different. Soon Gavina learns that Struan’s past is complicated and begins questioning his quilt. Could she trust this man and save him like she was once saved, or is this all a madman’s trick to break his bonds and taste blood again?