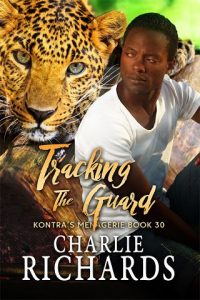 Able Lieder hasn’t seen his mate in six days, but he can’t do anything about it. He knows the guard—Olson—doesn’t understand why he feels drawn to him, bringing him treats and talking sweetly to him. He can’t explain it to him, either, since the scientists are keeping him in cat form. When Able overhears the scientists talking about an experiment that will surely end his life, he figures he should be grateful Olson isn’t around to see his demise. Except, then Able is rescued. A group of shifters arrives and frees everyone, led by a grizzly shifter named Kontra Belikov. At first, Able fears that they killed his mate in the process, but Olson is nowhere to be found. With the help of Kontra’s gang, can Able figure out where Olson disappeared to?