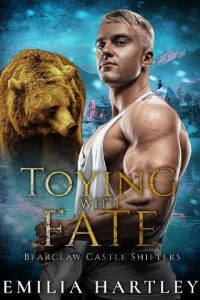 All Ana wants is an explanation.

She thought Brandon was her forever love right up until he didn’t show up for their wedding. He left without a word. No apology. No justification. The year since has been grueling, and Ana wants to move on. But she can’t do that while she’s holding onto Brandon’s engagement ring—and his memory. So, when a stranger sends her Bandon’s new address, she sets off on a trip she can’t afford in hopes of some closure.

Brandon hasn’t been fit for human society since a bear attacked him at his bachelor party and left him with his own internal beast. He’s certainly not fit to be around Ana. He couldn’t live with himself if he hurt her. That’s why he took himself away from their hometown, and he could throttle his Alpha’s interfering mate for bringing Ana into town—into danger.

Seeing her makes him realize how much he has missed her, though. And for the first time, his beast settles a bit. The beast loves Ana as much as he does.
But they can see how much he hurt her by leaving. Maybe he can control himself and his beast around her, but she’ll never forgive him for leaving her at the altar.