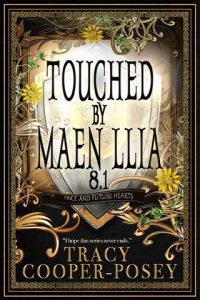 Caught between magic and truth…

Catrin is a handmaiden to the old Queen of Dyfed, whose husband and king, Geraint, has died without an heir, leaving the kingdom ripe for plucking. Yet Dyfed is the birthplace of King Arthur’s enchanter and adviser, Prince Merlin, who travels to the troubled kingdom to settle the question of who should be king.
Marcus Jorath is a newcomer to Camelot and wants only to serve King Arthur, whose peace has brought such a difference to the life and prospects of his family. Yet he is assigned to travel with Merlin to the out-of-the-way kingdom of Dyfed instead.
When the Dyfed mage, Ianto, declares it is mid-summer’s day, the maids of the kingdom visit the Maen Llia to make a wish. Catrin disputes it is the solstice, for she can read and is learned in the ways of tracking seasons and more, but no one listens to her, and she is forced to visit Maen Llia with the other women.
Merlin’s company of armed men come across the women, and Marcus finds himself drawn to the fiery redheaded Catrin and her blunt, direct way of speaking and thinking about the world. Their attraction puts them in the path of Ianto, who is more than the kingdom’s inadequate mage, and has plans of his own he will not let a mere slip of a girl interfere with…

*This novella is part of the historical fantasy romance series, Once and Future Hearts, set in Britain during the time of King Arthur.