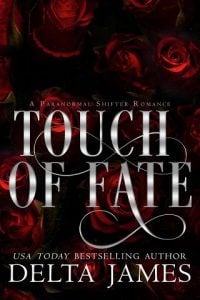 They say I died… they are wrong

Once more a malevolent presence threatens wolfen society. They say my love story with my fated mate, Darby, ended with my death, but they were wrong. They say my eldest son, Jean-Edouard, is nothing at all like me, they are wrong about that as well. They say a lot of things, but I will prove them wrong.
Touch of Fate bridges the gap between Jean-Michel and Darby’s love story chronicled in the Wayward Mates and Tangled Vines series and the new Fated Legacy series set to begin with Touch of Fate and follow on with the release of Touch of Darkness.

*Part One is set in 2028 on the tenth anniversary of Jean-Michel and Darby’s bonding. Part Two is set in 2038, on their twentieth anniversary. And Part three is set in 2048 on Jean-Michel’s 50th Birthday.
Throughout the novella, readers will get to catch up with a lot of their favorite couples and be introduced to the next generation who will populate the novels of the Fated Legacy series.