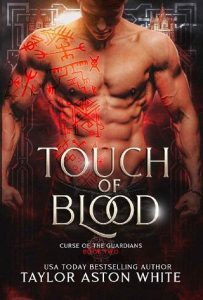 He’s never wanted anyone… until her.

After being condemned to the fighting Pits as a child, Kace was forced to do horrifying things to survive. Now, as an adult with a curse that intensifies his rage, he keeps himself away from anything that can break his carefully constructed control. So when he meets Eva, the only woman who has ever ignited such raw, violent passion, he has no choice but to stay away.
Eva didn’t think much when her vampire ex-boyfriend showed up asking for her back. Except she wasn’t interested, and the man she had once loved wasn’t taking no for an answer. Defended by a tall, moody and definitely dangerous man her ex left, and she thought that was the end of it…
Until she wakes up dead.
Thrown into an unfamiliar world, Eva only has one hope to free herself from her new master, and it just happens to be the same man she’s been warned to stay away from.