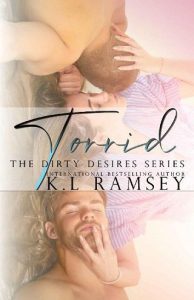 So much for vows.
So much for promises made and not kept.
Happily ever after was short-lived and Grace wasn’t sure what to do with the rest of her life. Her husband of just one year had walked out on her—without a word, without warning, and without giving her a chance to fix whatever was wrong. That was the question she couldn’t seem to answer though—what the hell went wrong after only one year. Archer seemed happy with her. He gave her no signs that he was miserable enough to leave her and everything that they had built together since college. He never said a word about having second thoughts after they were married or when they bought and moved into their brownstone.
Nothing.
Not one word.
Not a single sound.
Until Jon started texting her. He was her ex and her husband’s best friend. He knew where Archer was and even with his promises that Archer was safe and well, she still didn’t feel better. She missed Archer but when Jon talked to her the way he did, she longed for things that she hadn’t allowed herself to think about since she was dating them both in college. Deciding between the two of them back then nearly tore her soul apart. She couldn’t do that again—she wasn’t strong enough.
But Jon wanted her.
They both did, and how could she tell either of them no?
She couldn’t.