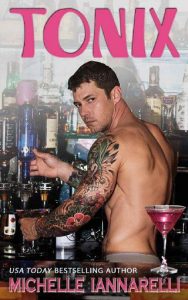 Dominic Taylor fell in love with his best friend when he was thirteen. At eighteen she was gone. Dominic was devastated. He packed up his life in the city and headed to the beach.Antonia Milano was forced into a loveless marriage by her father. Luckily, the awful man she married was killed in an accident and she was now free to enjoy her life. The debt her father owed was paid.Dominic spends his nights mixing drinks at Tonix, a beachside bar. He often wows the women with his talents behind the bar as he mixes up drinks while putting on a show.Antonia decides that what she needs is a fresh start. As a child she always dreamt of a house on the beach. She imagined romantic moonlit nights with the love of her life and days filled with children building sandcastles. In search of a life worth living, Antonia moves to the coast. Dominic is in the midst of mixing a drink when he sees Antonia sit down at the bar. He feels a rush of emotions that won’t allow him to look away.Antonia can’t take her eyes off the shirtless, tattooed man standing before her. Surely, this is a second chance for a happy ending…or is it?