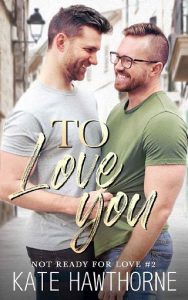 Adam and Cooper have been in love with each other for over a decade.

At the beginning of their relationship, Cooper thought he might have asked Adam for too much. Trust issues from his past pushed him to make steadfast demands that Adam wasn’t able to meet. Even though neither of them wanted to admit it, things between them were going to end before they even got started.
Ten years ago, Adam’s life was in a state of upheaval. He thought he knew who he was and what he wanted, but the development of his friendship with Cooper into something more proved that couldn’t be any further from the truth. Forced to question things he’d long believed about himself, Adam faltered when he needed to stay strong.
A decade later, Cooper and Adam are back where they began. Wanting but nervous. Interested and unsure. Even though they’re determined not to mess things up again, growing older hasn’t made them feel any wiser. On uneven ground, but fighting for a second chance, Adam has to get over his preconceptions about what it means to have control if he wants a chance at happiness, and Cooper has to admit it’s possible to sometimes bend without completely breaking.

To Love You is a 65,000 word romance between consenting adults with D/s themes and kink