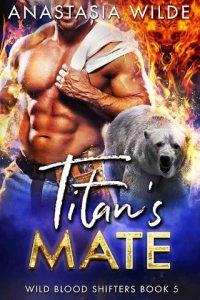 He was sworn to protect his people. He failed.
Now a dying shifter woman tells him he’s the only one who can save her.
She’s wrong.

After Titan’s entire clan was killed by rogue panthers, he tried to start a new life with the Wild Blood Crew. But he can’t let go of the past that haunts him—or the belief that one day his gods will make him pay for his failures.
He just hopes he won’t take anyone else down with him.
Mari Jiang carries a demon’s curse buried within her, like a ticking time bomb—and it’s about to count down to zero. She knows she can’t be saved, but there’s one shaman who has the power to guide her spirit to the realms of her gods before the demon can drag it down into hell.
When she went looking for him, she had no idea how much danger she’d put him in, or what her request would cost him.
And she had no idea of the instant connection that would bind them together.
Titan is wild, sexy, caring, funny, and carrying a heartbreaking burden of guilt. Everyone keeps telling them both that the mating bond carries the most powerful healing magic in the world—but for them, it’s also the biggest risk. And Mari will do anything to keep her mate safe.
When the time comes to choose, Titan knows what he’ll do. But he’s afraid that just like before, it won’t be enough…