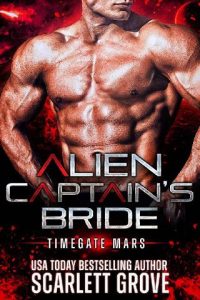 Mars is dying. Without new females to pass on our genetically altered DNA, it will be the end of humanity.

Alien Captain’s Bride
Doris
When giant bugs crash into the college where I work, and a group of us are captured and taken into space, I’m convinced they’ll eat us all.

Jaxxo
As a captain in the Martian Marines, I have been tasked with the most important mission in Martian history. Pass through the timegate, save the Earth females, and return to the future.

Doris
When I’m matched with the captain who rescued us, I’m suddenly overcome with the most unspeakable desires.

If I’m all hot and bothered, how will I ever know if my growing feelings for him are real?

Alien Warrior’s Match
Damious
I am King of Mars, yet I have still not been matched with my Earthling mate. When I see the beautiful little female at the bridal house, I go to claim her. The moment I smell her delicious scent, for the first time in my life I lose control.

Madeline
On Mars, the accommodations are luxurious and the food is excellent. Earth is doomed and that means my sister is too.
King Damious has the crushing responsibility of Mars on his shoulders. How will I convince him to risk his planet for me?

Alien Lieutenant’s Lover
Sophia
I’ve never been the brave one, but the dangerous mission back to Earth to retriever Abigail is all on me.

Martix
I’ve been tasked with leading the mission back to Earth to the queen’s sister. But Sophia incites the effects of the matching serum, my doubts about the mission are multiplied.

Sophia
Every time I see Martix, I feel like my body is going to melt into a sticky puddle of quivering goo.
Abigail hates aliens. If she finds out that I get damp every time the massive Martian looks at me, she’s never going to trust a single word I have to say.

Martix
I must contain this desire with the iron will of a trained Martian Marine, rescue the queen’s irritating sister, and return through the timegate before it’s too late. If I’m unable to do my duty, it could spell disaster for us all.

Alien Admiral’s Mistress
Bethany
All I ever wanted was a family, but if they Mantis swarm gets through Mars’s shields, I’ll end up dying alone.

Raylon
As Admiral of the Martian military, the defense of the planet falls on me. Now that the Mantis swarm has traversed the gate into our time space, that oversight may spell disaster for us all.

Bethany is the kind of woman I never imagined I could have. But my responsibility to Mars has made it impossible to give her what she deserves. I hope that my harshness won’t destroy what we might share.
If we survive, I hope that I still have someone to come home to.

Alien Inventor’s Mate
Malico
I believed my greatest invention was the Timegate. Now I’ve been called to invent a weapon to eradicate the Mantis Swarm.

Abigail
I’ve been matched with Mars’s greatest scientist. He’s exactly the type of man I need to help me complete my mission. But to my utter surprise, I begin to fall for him.

Malico
I have the answers Abigail wants but telling her could risk everything.