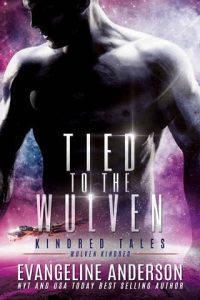 Breenah and the Beast…
All her life Breenah has been told that men can’t be trusted. She lives on Griesha Prime—a planet where all the males were expelled due to their mistreatment of the women. So imagine her surprise when a huge male prisoner who has crash-landed near her Compound is brought it and manacled to the magnetic Stasis Wheel and she is told to guard him.

Rax is in a fix. He’s a Wulven Kindred with a ravenous Beast inside—a Beast brought out by moonlight. And Griesha Prime has not one, not two, but three moons! Not only that, but a Lunar Equinox is coming up and all three heavenly bodies will be in the sky at once. He has to get free before that happens.

Rax knows he needs to escape but he finds himself completely enthralled by the curvy little female who has been set to guard him. And for her part, Breenah feels drawn to the huge warrior—her body responds to his in ways she didn’t even know were possible. But when the Equinox comes and all three moons rise overhead, she will have to make a terrible choice. Should she run from Rax’s Beast…or submit to it in an act of sensual sacrifice that will leave her forever…Tied to the Wulven? Read this hot Scifi, Shifter, Curvy Heroine, Enemies to Lovers Romance to find out!

Author’s Note–This is a spicy one. Breenah likes taunting Rax while he’s all tied up but w