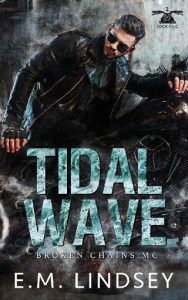 Gunner has spent half his life running from his past, and the other half trying to protect himself from ever being vulnerable again. He’s escaped his old club and worked hard to earn the VP patch on his cut after joining the Broken Chains. But his entire life is turned upside down when Gunner’s past comes back to haunt him, and the club’s Deaf delivery guy ends up at the wrong place at the wrong time.

When his president asks him to protect the injured man, Gunner wants to say no. After all, he hasn’t been able to take his eyes off Logan since the day they met, and Gunner can’t afford that kind of distraction. But ignoring him is damn near impossible when every time he looks at Logan, he starts to feel something. And Gunner doesn’t think he has the power to resist him for much longer.

There will be no promise of a future though, if the Broken Chains can’t protect Logan from the mess he’s in, but even if they succeed, Gunner isn’t sure there’s a place for Logan in his world.